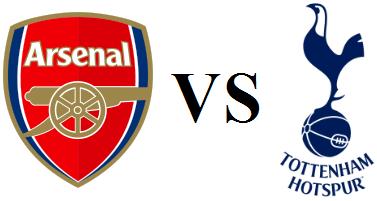 Arsenal are undefeated in five of their last six matches against Tottenham, but are looking for their first win over Spurs in the Premier League since the spring of 2014.

Arsene Wenger’s team is coming off a 4-1 trouncing of Sunderland that saw Alexis Sanchez and Olivier Giroud score two apiece. Meanwhile, Tottenham are coming off of three consecutive draws, although the White Hart Land outfit are still the only undefeated team in the Premier League this season. Despite Spurs’ dominance over reigning champions Leicester over the weekend, Tottenham could not hang on to the lead.

With Spurs struggling in front of goal in recent weeks, three goals in their last five matches in all competitions, manager Mauricio Pochettino is hoping striker Harry Kane will be fit to play in the North London Derby.
Kane has missed the last month of action, and despite Son Heung-Min filling in for Kane and playing well, his form has dipped greatly in recent matches.

“Of course it’s important for Harry to come back. Harry is our main striker. We are very happy with Vincent [Janssen] but we brought him to share that position with Harry,” Pochettino said.“It’s not only our strikers. Our second line needs to score more and be more aggressive, to be more determined to score and not only to play well. We need to be more determined to score – be more direct, shoot, believe.”

Keys to victory
Spurs definitely need Kane back as the attack is sputtering. It isn’t just the finishing, however, as the team need more creativity in front of goal. Tottenham have scored the fewest goals of the top five Premier League clubs currently.

Pochettino has relied heavily on his excellent defence this term. The Spurs’ defence has been fantastic all season, conceding a league low five goals. Tottenham have kept five clean sheets in the process, the best in the league. However, their defence will be tested like it hasn’t been before in 2016/17 when visiting the Emirates.

Arsenal’s defence has been nearly as solid as Tottenham’s this term, and since their blip against Liverpool to open the season, the Gunners have been excellent. Arsenal’s attack has overshadowed the team’s work at the back, however, as the Gunners have scored the second most goals in the Premier League.

Sanchez playing as the No. 9 is just one way Wenger may set up. However, with Giroud back to full fitness, the Frenchman could be favoured as a target forward with Sanchez playing off of him. Theo Walcott, Nacho Monreal and Santi Cazorla could all three return in time for the fixture. However, with Arsenal playing so well, they should only find places on the bench.

Players to watch out for
With the form Sanchez is in, Tottenham will need to do everything in their power to stop the Chilean. Sanchez should get the start ahead of Giroud, however, with the Frenchman getting some fitness under his belt, the Gunners will be much more dangerous with the pair playing together.

Aaron Ramsey has also returned from a layoff and should prove important in the North London Derby. Ramsey played the last 12 minutes against Sunderland at the weekend, picking up an assist on Sanchez’s second goal.

Tottenham’s key player will be Kane, if he is fit enough to start. Spurs do not share the goals like their North London rivals, which has been their biggest downfall.

On the defensive end, Tottenham will need a solid shift from Hugo Lloris. The goalkeeper has been brilliant this term, keeping four of Spurs’ clean sheets. His defence in front of him have been brilliant and it is a testament to his marshalling of them at the back.

Currently, Arsenal are 19/20 or 1.95 decimal to win outright according to intertops. Based on their form, the Gunners can’t be looked past getting all three points. Form could play a big part in Sunday’s fixture.

History doesn’t favour Spurs. Tottenham have only won once in their last 10 matches at the Emirates.

What is your pick?
Let us know your pick in the telegram sports betting channel