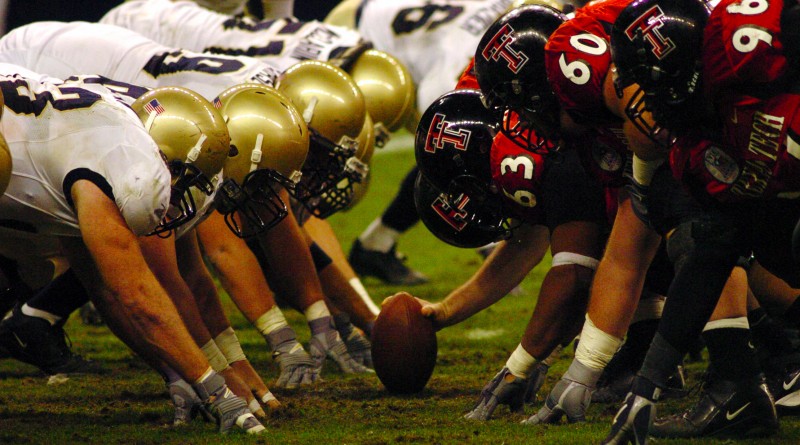 The summer is over and it is time for some football. Most bets are on the moneyline or spread but there is a way to cross some important numbers in american football with the use of teasers. You might have heard of teasers and thought that they are too hard to understand or that they are so called “sucker bets”. We are going to have a look at nitrogensports and 5dimes teasers.

What are teasers?
Teasers are parlays with modified spreads and rules*. In a normal parlay all picks must win for the parlay to win. In a teaser it is for the most part the same but the spread has changed. Instead of -2.5 or +2.5 the spread is now +4.5 and +8.5 using a 6 point teaser. The 6 point teaser added six points to each side. This is similar to “buying points” but in football the margin of victory often involves the same numbers due to the scoring.

Why teasers are useful in NFL and NCAA football betting
Most NFL games are won with a margin of 3 or 7. That means if we can cross those numbers and go from a losing bet to a winning bet then we have increased our chances of winning. For example underdog team is +1.5 at the spread. Add that to a 6 point teaser and that team is not at +7.5 and we have crossed the 3 and 7 point marker. Now if the underdog loses by 3 or 7 points we still win that leg of the teaser. If we just did a random teaser and did not pay attention to the margin of victory then we would lower our chances of winning. For example a teaser that went from -1 to +5 is crossing 3 but still not as good as crossing both 3 and 7 or if the teaser moved the spread to +2.5 +6.5 or -3.5 -7.5 then it wouldnt make sense to take that teaser. You are losing on margin of victories of 3 and 7 in those cases. NCAA Football has too much variance. You want games that are going to end close to the line. With college you could instead think about Pleasers.

Modified Rules*
Not only do teasers move the spread there are also different rules depending on the sportsbook. The three basic teaser types are as follows:

All teams in the teaser must be a win or push for the teaser to payout anything.
A push will reduce the payout of the teaser.

Lets take a look at some examples

In this example at nitrogensports we chosen two underdogs that have a +2.5 spread. We are going to go with a 6 point teaser that will move the spread for both teams to +8.5 and we have now crossed the numbers 3 and 7. As long as both teams to not lose by more than a 8.5 points we are good. In football that would mean losing by a touch down and a field goal or two touch downs as opposed to +2.5 which means if they lose by a field goal then your bet loses. You will also notice that nitrogen only offers “ties lose” teasers. Let´s shop around and see if we can get some deals on other types of teasers. 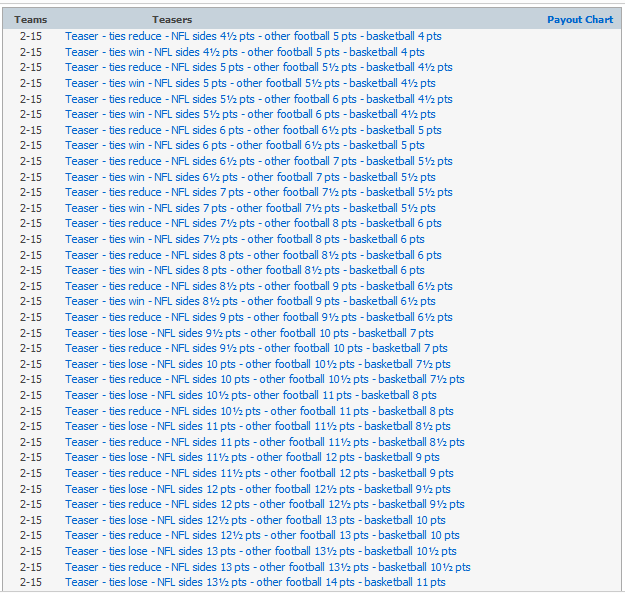 Here is a partial list of the teasers offered at 5dimes. You can see that they give you a different ammount of points depending on if you are teasing basketball, “other” football (NCAAF) and NFL. You can also choose between ties win or ties reduce. Lets compare nitrogen with 5dimes. 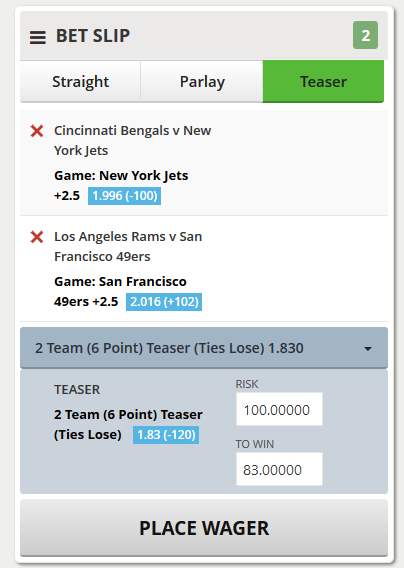 We are just using 100 btc in the example to compare. Nitrogen uses bitcoin everywhere on the site. While the offshore sportsbooks accept bitcoin they do not use it as a base currency on the site and everythign is in USD. Don´t let that confuse you in the example. You can see that at Nitrogen we have our 6 point teaser ties lose and at 5dimes we have out 6 point teaser ties reduce. At Nitrogen we are risking 100 to win 83 and at 5dimes we are risking 100 to win 90 and ties reduce. I think we can see that 5dimes is offering us a better value in this case.

Can you get the same value by using a parlay and buying points?

Here you an clearly see we are getting a better value using a teaser. This could change depending on the line of the game. What the parlay does allow is more flexiblity for you to buy points on one team or buy 3 points on one and 7 on antoher ect. Also keep in mind that standard parlays are “ties lose”. I would compare with nitro but I can not buy 6 points. I can only buy 1.5 points in each direction.

If you are going to bet on football then it is worth it to learn about teasers and add them to your degen weapons of choice.

Where can I place teaser bets? Nitrogensports 5dimes Bookmaker