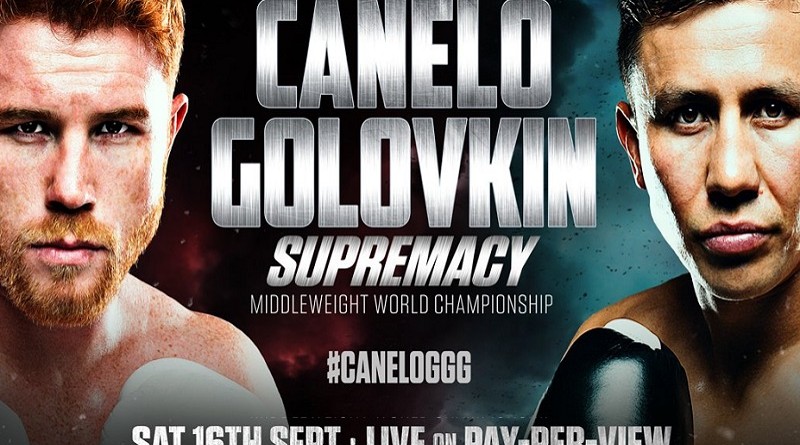 Just after the the Mc Gregor vs. Mayweather figt is another boxing fight that will go down in boxing history. Your average joe might not even know who Canelo () or GGG () is but if they tune in this weekend they won´t forget. This will be a fight for the true middle weight champion. It is a little more complicated than MMA as far as titles go. There are several belts on this line it is winner takes all.

What is at stake?

BF Middleweight Title – Golovkin will be defending this for the fourth time since beating David Lemieux in 2015.

WBA (Super) Middleweight Title – Boxing can have really strange belt sithuations. Golovikin has not lost this title since he won an intern title in 2010. After he won the belt was changed to a regular belt and then th WBA made it the “WBA Super title. There is also a regular middle weight champ, yes you heard right there are two middleweight champs a super title and a regular title. I don`t understand why but this is up for grabs this weekend.

WBC Middleweight Title – Golovkin won this in 2014 and has defended it five times.

IBO Middleweight Title – Golovkin won this in 2011 and has defended it a record 15 times.

Ring Magazine Middleweight Title – This is Canelo’s, it is more or less the same as the lineal title.

Lineal Title – This is not a belt that you hold in your hands, but this is the real title. The real unified champion has the lineal title. No confusing intern shit or super and regular belts. You just have to beat the guy ahead of you. In recent history of the lineal title:

“My man, let’s just say this is a real, true middleweight fight at 160 pounds,” De La Hoya told ESPN’s Stephen A. Smith and Max Kellerman. “Both guys will fight in 10-ounce gloves. You know, there’s no rehydration, weight-class clause and all this B.S. and this an that. It’s a true middleweight fight, at 160 pounds. And that’s it.” – Oscar De La Hoya

In some fights there is a rehydration clause. This sets a limit for how much you can weigh after the first weigh in, so you have two weigh ins. This time around there is no ryhydration clause. This could help both fighters with their cardio and not having to worry about weight as much and they will be able to focus on the matter at hand, trying to knock each other out.

I tend to agree with the idea the bettors have so far. I think a under 11.5 rounds at +100 (2.00) is not a bad bet considering that they can gain as much as they want after weigh in. They both have power and plenty of KOs on their record.

When is Canelo vs. GGG?

What are your picks for the fight? Let us know below in the comments