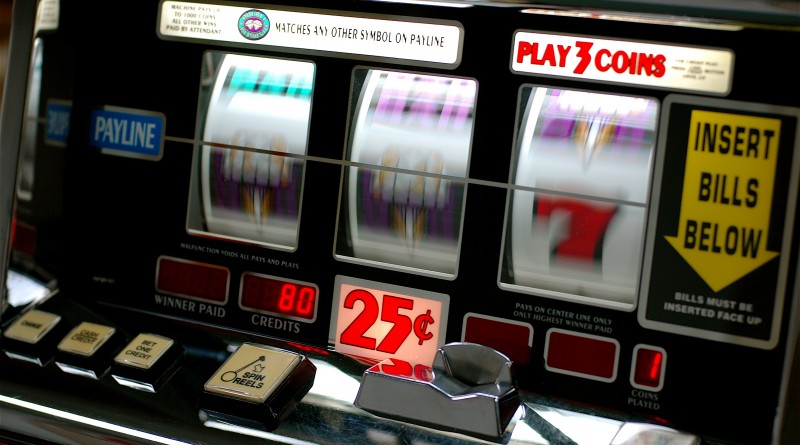 Sometimes you just need to accept the fact that you aren’t going to need to spend your evening inside the casino. The day was Chinese New Years, my bankroll was $100 – 5 crisp $20 bills that I had just taken out of my bank’s ATM machine and I was ready to spend a whole evening having a fun time at my local casino. As soon as I walk in I sit down at a slot machine next to the entrance of the casino while I was waiting for a friend of mine to show up. I jokingly sent him a text message saying “well, i’m going to lose $20 real fast while you find a parking spot and take your sweet ass time getting in here” before I inserted my $20 into the machine. He quickly responded to my text message telling me to not be an idiot and to just wait patiently for him to get into the casino. Well, being the degenerate gambler that I am…. I decided to ignore his advice.

The bets on the machine were ranging from 40 credits to 480 credits (40-80-120-160-240-320-480 to be exact, with each credit being worth 1 cent each). I decided that in order to sufficiently burn five minutes while my friend entered the building and found a spot to park that I should only bet 40 or 80 cents per spin to make the $20 last the entirety of the time it would take him to hurry his ass up and get inside the damn place. I bet 40 cents a few times, didn’t hit shit…. Then I decided to bet 80 cents a few more times…. Didn’t hit shit. Finally, I was down to $13.20 in the machine, or 1320 credits. I noticed that the second highest bet option was 320 credits, and seeing as how that would leave me with exactly $10 left in the machine if it didn’t hit anything, I decided this would be my final spin on the game. I slowly pressed the 320 credit button to place my extremely large bet for a single spin… After not hitting anything profitable for several spins on significantly smaller bets, I watched the reels on the machine start spinning. Wild reels showed up on every single reel while the spin was being animated.

I jokingly said “Yeah, it’s going to land full wilds. Sure” and looked down at my phone for a split second to see if my friend was any closer to entering the building.

When I looked back up, the most amazing thing in the world happened…..

It did land full wilds! I was still rather upset though, as a $320 win seemed very small for a bet of the size I placed and the fact that it was literally the highest paying combination of symbols in the game. A quick squint of my eyes made me realize that I had in fact not seen one of the zeroes on the payout message. All of the sudden it hit me, “HOLY SHIT that is THIRTY TWO HUNDRED GOD DAMN DOLLARS” at which point the jackpot handpay music starting to blare. I screamed at the top of my lungs “HANDPAY!!!!” and did a little dance in my chair while texting a picture of the screen to my friend who was making his way towards the casino entrance.

In a period of about 15 minutes, I had managed to take a $100 bankroll all the way up to $3200. When my friend arrived in the casino, and I had showed him that I indeed did in fact win the jackpot I sent him a picture of, he couldn’t believe it. It was at this time that I remembered giving back smaller wins in the past, and decided that I was going to leave no matter what at that moment in time. So we did, we left.

I got in, got out, and had more $100 bills in my pocket than could sufficiently and comfortably fit in my wallet. We laughed about the fact that we would’ve given back all of our win if we stayed for even an hour or more, and we were right.

This is an example of one of those times where sometimes you just don’t need to spend all day and night inside the casino -sometimes if you’re going to be lucky it’s going to happen fast – and when it does, you need to be cognisant of it and realize what has happened and get the hell out of that place before you give it all back. My next story will involve me giving all of my winnings back when a similar situation involving really quick winning session at a local casino turned into a slow grind of about 12 hours where I gave it all back, and more. However, this time I will leave my readers on a positive note and if there’s anything I leave you guys with it is this — listen to your gut. When your gut is telling you that your luck has run its course for the evening – your gut is most likely right. Go home and enjoy your win, because big wins like the one I had this evening don’t happen very often.

It is time for the NFL playoffs, the first NFL playoff that will be played during pandemic times. It might