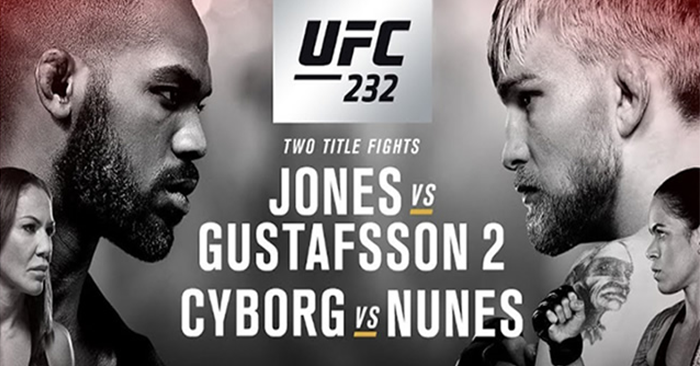 Jon Jones is BACK.. AGAIN and this time with another rematch. After beating Daniel Cormier in a rematch we get to see him fight Gustafsson again. The first fight was very close and many people had Gustafsson winning. The UFC 232 card also features Cyborg vs. Nunes as co-main event.

Jones looks bigger than the first time they fought, he will have some ring rust but after the first round he should be fine. We saw Jones having some trouble in round one vs. Cormier, fighting after a long break, we saw something similar when he fought OSP and people expected fireworks and instead we saw a more conservative Jones. Gustafsson has a similar build to Jones, reach and hight about the same and Gustafsson has solid wrestling and take down defense which eliminated the take down for Jones in the first fight and most of the fight took place standing. With Jones fighting after a break, and Gus knowing that he can beat this guy, I think the only bet is on Gus.
Gustafsson 3.43

Cyborg vs. Nunes, if someone is going to be big enough, strong enough to stand up to Cyborg is is Nunes. Both Cyborg and Nunes have tight technical striking, and Nunes might even have an edge in the wrestling department. Can Nunes really get it done? I think it is worth a bet and when the over on rounds comes out, ill hit that too.
Nunes 3.25

After getting glass in his eye after the Mc Gregor NYC incedent Chiesa is back, and fighting Condit who I thought was done with fighting and went on to start a hipster coffee business. I dont have an issue betting against Condit who might just be fighting to get morney to fund his hipster coffee biz vs. Chiesa who has been out and wants to get a fight in after having to sit on the sidelines for a while. On top of that Chiesa should be able to take down Condit and cause a lot of problems for him there.
Chiesa 1.55

Anderson wins this by getting Latifi on the ground, I dont think this is going to happen. Latifi has great TDD and is short and stocky, hard to take down. Latifi knocks this guy out.
Latifi 1.66

Anderson is tall and has power in her hands and some brutal knees. Those knees are going to be the most dangrous thing for Cat who is going to want to get this on the ground, and I think she shouldnt have a huge problem in doing so. Cat is going to get on top and finish this one and when the under on rounds is out ill take that too.
Zingano 1.81