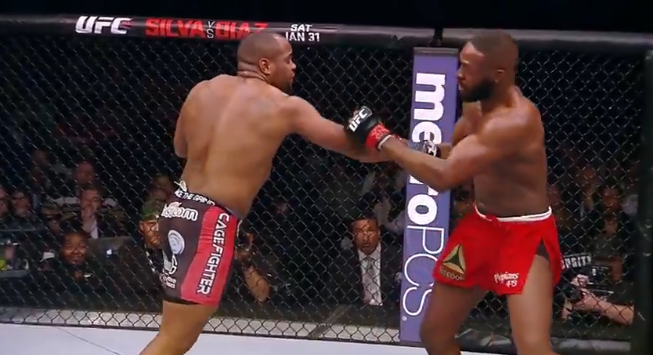 For some UFC Fight Night 90 Picks check out this post

If you watched any of the TUF episodes you know these two hate each other. Champion Joanna gets in Claudia´s face at every chance she can during the show. They have fought once in the cage and Joanna won but many question the judeges decision. It was a close fight and Claudia was able to take her down. I dont think Joanna will want to be anywhere near the ground or clinch with Claudia. She will engage less and rely on the jab, footwork and scrambles. Claudia doenst have bad striking but no where near the level of Joanna and it is the other way around on the mat where Claudia has a clear advantage. When the odds were better for Claudia I liked her to win as a bet but now money has come in on her and the odds have tightened up with Claudia as a slight underdog. I think this can go the distance and the books agree with a go the distance prop only paying 1.40 ! I think that Gadelha can get the sub, but if it goes the disance we could see a repeat of last time. Thats why I like the cards no bet option here.
PICK Gadelha scorecards no bet 2.60 5dimes

Brock Lesnar vs. Mark Hunt
The UFC hype train has left the station. Lesnar is back, maybe only for one fight but he is back. This fight almost reminds me of some of the “Freak Show” fights of PRIDE juiced to the gills WWE Lesnar comes in to fight fan favorite knockout artist Hunt. We know what Lesnar does, he is a freight train. That is his game, get on top of you and destroy. No submissions and pertty bad striking and horrible striking defense. We also know what Hunt does well and that is take heads off. Hunt is shorter and has a reach disadvantage here. Hunt being shorter can help him defend take downs and he has never had issues overcoming reach disadvantages. Hunt knows what he needs to work on coming into this fight and it is a part of his game that he has improved a lot, take down defense, but will it be enough? If Lensnar just runs across the cage for the takedown he can be met with a nasty uppercut from Hunt. He will need to stand some to get close. I like Hunts TDD and improved bottom defense more than I like Lesnar to simply take down Hunt with no damage to his head. That being said the odds are not great right now for Hunt at 1.588. Wait for more public money to come in on Lesnar and the odds to get better, anything above 1.8 for Hunt is good for me.
PICK – Wait for better odds on Hunt

Amanda Nunes vs. Miesha Tate
This one is pertty straight forward imo. Nunes is a killer in round one and two, if Tate can get Nunes tired then she can win rounds 3,4 and 5 or even finsh her. Tate doesnt want Nunes on top of her. Nunes has some serious Ground and Pound and I think Nunes even has an advantage in the clinch as well. That being said Tate will have the advantage in the later rounds. Tate is good at sticking to a stratgey to win and I see this either being done in round one or two or going the distance.
Pick – Nunes Scorecards no bet 3.000 5dimes

Frankie Edgar vs Jose Aldo
Aldo coming off the loss to Mc Gregor will want to prove that he is still a force to be delt with. Edgar wants to get back into title contention. This is a great match up and has fight of the night written all over it. Aldo an aggressive striker will not be able to only stay on the outside and use leg kicks. He is going to have to figure out another way to engage Edgar with his hands and using that leg kick on the end of combos. His take down defense will be tested againt Edgar who has top level MMA wrestling. The thing about Edgar is that wrestling is by no means his only weapon. Edgar is very fast at getting in and out of striking distance and since he is not afraid of the take down will be really loose. I can see Aldo having a good first round, but in Edgar come back style he should weather the storm and come back for the win. I am picking Edgar to win, I dont know if it will be via tko or judges. Even with Aldo´s elite striking Edgar is fast enough and has more tools to get it done.
Pick Edgar Win 1.87 5dimes

Travis Browne vs. Cain Velasquez
Of coure Cain is a monster with cardio for days. He was the champ and had some epic fights. He is going to want to come back strong. He has not been fighting much latley but we know he trains very hard. His game plan is no secret, high volume of strikes and relentless take down attempts to get ground and pound. This fight is only three rounds though, so he will be without those last two rounds were he can really use his cardio over other guys. The fight being a three rounder is an advantage for Browne. Browne is tall , but has a good base. When people try to take him down he spreads how his legs and his base is very big. He is the one that started the trend of elbowing people behind the ear when they are trying to take you down against he fence the “Browne Elbow”. We have seen a lot of fighters use this to stop takedowns and even get knockouts. Browne is no slouch on his feet has good speed and excellent footwork for being a HW. I see this fight a lot closer than the odds have it that is why I am going with the dog.
Pick Brown Win 3.350 5dimes 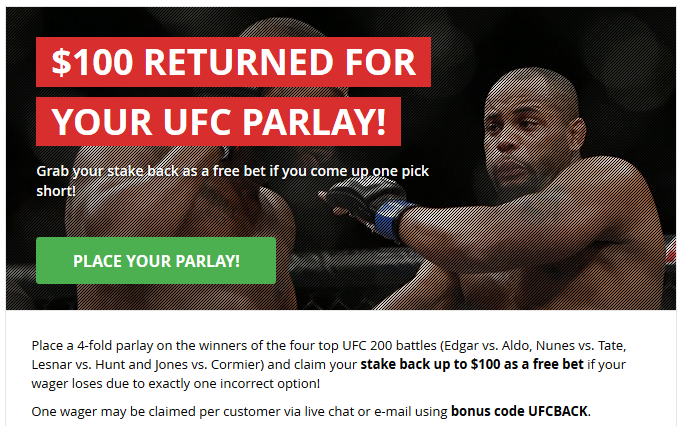 Intertops is offering a parly deal. Bet on a 4 fold parlay with the winners of these fights (Edgar vs. Aldo, Nunes vs. Tate, Lesnar vs. Hunt and Jones vs. Cormier) and if your parlay loses by one fight you get up to 100$ back. Lets say you bet 50$ on Edgar-Tate-Hunt-Jones and Edgar loses – then you get your 50$ back!

Want more picks?Join us in the Largest LIVE MMA CHAT were we talk about MMA and sports betting 247